I was going to make a card for this challenge because I need so many and am very far behind on making them this year, but I just wasn’t inspired.  I wanted to do something different.  I had cut these Santa Bears from our sponsor, Scrappy Dew, weeks ago. 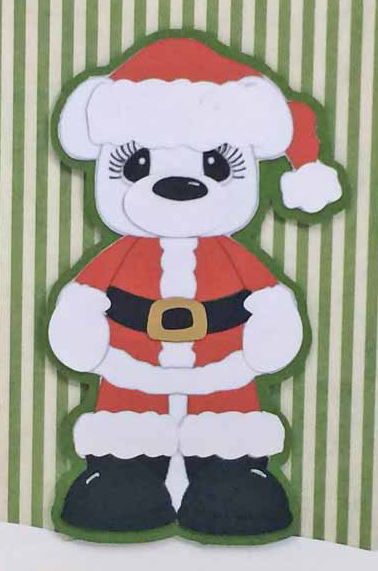 I used a combination of print and cut and paper piecing.  I printed and cut the Santa Bear png file and cut the shoes, belt, and all the white parts from card stock.  After I assembled the bears, I used a black marker to go over his eyelashes and added some reflections on his eyes, nose, and boots with a white pen.  He just needed a nice shadow to make him stand out better on patterned paper.

The Santa Bears were sitting on my desk waiting for inspiration to strike, but it just didn’t, until Wednesday of this week when I got Splitcoast Stampers’ Weekly Inkling in my inbox.  There was a tutorial for a five-sided box that I thought would be perfect to showcase this little guy and it could probably hold a hand-knit sweater for a grandchild . . .  Hmmmm.  YES!  But I wasn’t going to print out a template and cut it by hand when I have a perfectly good cutting machine.  It was a fun challenge to create this box in Silhouette Design Studio using just rectangles, ovals, and pentagons! 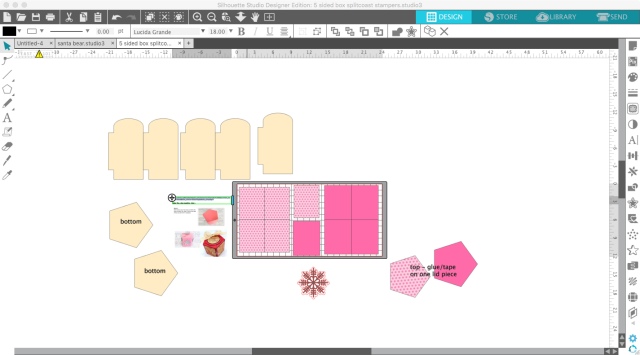 I cut out and assembled my box, but there were two problems.  One, it didn’t hold its shape very well without a base.  The tutorial says to assemble the box and trace the bottom to make the base, but that wouldn’t be a perfect pentagon because it kept shifting while I held it.  That’s where the pentagon shape in Design Studio came in.  I measured the box and created a pentagon to fit.  I cut out two of them, one for the inside of the box and one for the bottom. 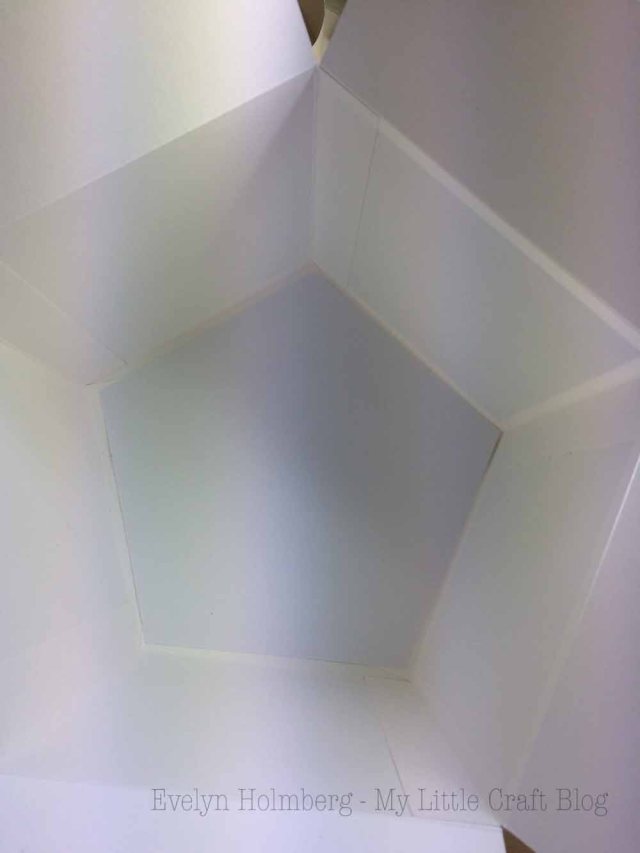 The second problem was that when I folded the top flaps, the hole was too big 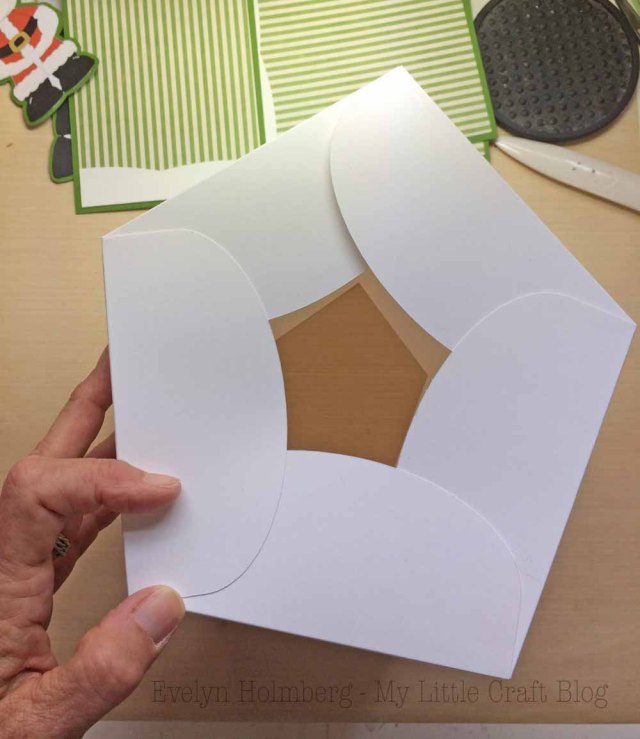 so I cut out two more pentagons, one from card stock and a smaller one (using an internal offset) from the patterned paper.  I adhered them to one of the flaps.

I made some snow drifts using a very old Creative Memories wavy cutter and put my Santas on the sides using foam tape.

The top of the box needed a little something, so I looked in my Silhouette library for a snowflake and found this one.  Perfect!!

Head on over to Cut it Up to get yourself in the Christmas spirit, then create your own Christmas in July project and link it up!  You could win a Vault Membership ($20 value) plus 150 coins to use in the vault to get more patterns from Scrappy Dew!

I created this little blog so that I could have a place to show different crafts that I make for my family, my friends, my students, and myself! I have always enjoyed crafting. I particularly love paper and wool, and that's what I'm currently working with.
View all posts by Evelyn →
This entry was posted in Paper Crafting and tagged 3D, box, Christmas, Christmas in July, Cut It Up Design Team. Bookmark the permalink.

4 Responses to Cut it Up Christmas in July 2019